It can’t be easy being Cher.  Fans don’t expect her to simply strut around on stage and sing; they want a spectacle.  Cher apparently sees this as a challenge, because the “Dressed to Kill” tour is bigger, stronger, and shinier than her last outing, the so-called Farewell Tour that ended in 2005.  That’s why Cher called Braun Productions.

When you are a superstar of legendary status and you need to top what raised the bar the last time around, you need an iconic moment that will leave your fans drooling for more!  That’s why the biggest stars on the planet call Braun Productions. 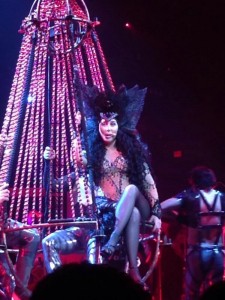 Braun Productions was commissioned to design and build 5 iconic pieces for Cher’s new “Dress To Kill Tour” which opened in Phoenix on Saturday, March 22, to a sold-out crowd at the US Airways Center.  Featured in Cher’s jaw-dropping performance is a nine foot tall custom built chandelier from which specially trained aerialists perform on throughout the number “Dress To Kill.”  Even Cher herself took a swing. (Pictured Left)

The show opened with a breathless one-two punch by featuring her recent club hit “Woman’s World,” followed by the twirly disco of 1998’s “Strong Enough.”  Then Cher talked to the crowd in a delightfully disconnected fashion, with a conversation that started with the topic of Kim Kardashian’s rear and ended on Abraham Lincoln’s stovepipe hat.  She claimed this was definitely her farewell tour, though how seriously can we take the news?  At 67, she looks fit and ageless, though she doesn’t shy away from the topic: “Any people here my age?” she asked the crowd, to a cheer of approval. “I don’t believe you,” she announced.

If it seemed like the show couldn’t top that moment, then came the encore, in which she floated above the crowd on a pedestal that drifted around the arena while she sang “I Hope You Find It.”  It was essentially Cher’s grand-slam moment, which left audience members open-mouthed in wonder.  On her last tour, she dared her fellow female singers, “Follow this, bitches!”  Really, how can they?

They can’t!  Unless of course, they come to Braun Productions!