Costume designers create the look of each character by designing a wardrobe and accessories that the performers will wear in the specific performance.  Depending on their intended use and complexity, costumes may be required to endure extraordinary stress during a performance.  Some examples of extraordinary stress would include when a performer is flying or performing aerial feats.  The costume itself may need to perform an extraordinary feat;  it may need to light up, smoke, sparkle, shoot confetti, or even spray water.  That’s when you call Braun Productions.  Our designs faithfully reflect the personalities of the characters in the script and are designed to WOW your audience.

Our wardrobe team is in constant creative collaboration with your costume designer, the director, and the set and lighting designers; ensuring that the costumes are smoothly integrated into the production as a whole.  At Braun Productions we begin our work by reading the script or treatment to be produced.  If the production is set in a specific historical era, the fashions of that period will need to be researched.  To stimulate the flow of ideas at the first meeting with the director and the design team (set, costume, lighting, and sound designers) the costume designer may want to present a few rough costume sketches.  This is also an appropriate time to check with the director on the exact number of characters or performers needing costumes, as any non-speaking characters the director plans to include may not have been listed in the script.

Once the costume designer provides us with the costume plot we can begin our design phase and cost analysis for each unit being built.  The costume plot is a list or chart that shows which characters appear in each scene, what they are wearing, and their overall movement throughout the production.  This helps track the specific costume needs of every character.  It can also identify any potential costume challenges, such as very quick changes between scenes.  When the director and production team have approved the costume designer’s preliminary sketches, they are then able to draw up the final costume designs.  The final designs are done in full color.  They show the style, silhouette, textures, accessories, and unique features of each costume. 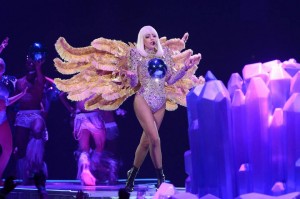 These final designs are then used to build the amazing iconic elements that Braun Productions is known for.  We can build anything you can imagine!  We are experts in the development of functional, special effect costumes that leave your audience wanting more.  From Britney Spears’ animatronic flying wings to Victoria Secret’s iconic angel wings, we can bring your ideas to life!

The new SLS Casino wanted something visually stunning to surprise their guests in the new State-Of-The-Art night club called “LIFE”! 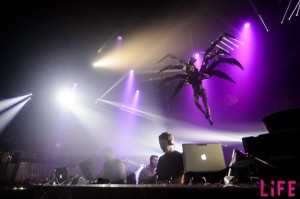 We custom built a “Spider Legs Backpack” designed for an aerialist to wear while flying around the venue. The unit was designed by Braun Productions to work seamlessly with a custom made flying harness that keep the performer comfortable, safe and secure at all times.

Also the content script called for the appearance of an unusual fetish piece giving the brilliant silhouette of a shark like set of fins for one specific character. The results were stunning! Braun was thrilled to design and build such a unique piece, paying meticulous attention to the detailed hand stitched, custom metallic metal leather and then adding a special aged patina process to the unique set of fins. 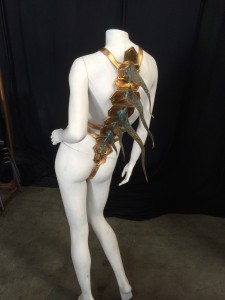 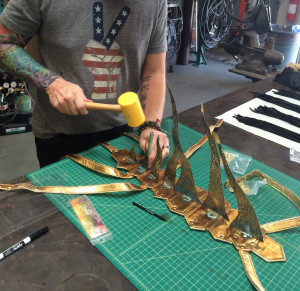